Many of my older readers will recall the name Frieda V. Rieck.

She was associated for many, many years with Cape Girardeau’s musical life. A skilled violinist, she taught vocal music, string instruments and orchestras here at all levels — elementary, high school and college — for almost 40 years. Rieck is credited with organizing the Cape Girardeau Symphony. She taught at Southeast Missouri State College and retired in 1962 as head of the Music Department.

But a 1972 article pointed out that her interests weren’t just musical. She had a green thumb as well.

Miss Frieda V. Rieck: “Older civilizations have always had a great respect for living things…trees and flowers…and I suppose some of that rubbed off on me.” (Southeast Missourian archive)

Ever wonder why some people possess that coveted “green thumb” and can coax a wilting geranium into a burst of full bloom while others of us must be content with raising healthy, if unwanted, crops of ragweed?

Miss Frieda V. Rieck, 1647 Ridgeway, has a green thumb not only with the lush landscape of her garden but with people as well. During her 16 years at Southeast Missouri State University, the last several spent as head of the division of music, she produced an enviable crop of successful young musicians by harmonizing a thorough knowledge of the field with a good deal of love.

Her interest in music spawned the Cape Girardeau Symphony, which she originated, and she also worked with a precision drill drum and bugle corps at old Central High School.

Before her retirement in 1962, the former professor, a graduate of Northwestern University, admits she “never had time for anything but music. I was devoted to music and I loved working with the young people. But when I retired, there were so many things I wanted to do that I never had time for.”

But now that she has the time, Miss Rieck has spent it well, with her interests branching out into several different areas.

Besides her involvement with ceramics (she turned out 65 pieces the first winter she took up the avocation), Miss Rieck became interested in garden club work “because I wanted to do something that was reflected in the community.”

A member of River Hills Garden Club and its past president, Miss Rieck is now serving as chairman of the Cape Girardeau Council of Garden Clubs Fall Flower Show. Theme for this year’s show, which will be held from 2 until 6 Saturday and Sunday afternoons at Hawthorn School, is “Out of This World.” Artistic arrangements in the show will be centered around outer space, proceeds of the show will go toward maintaining the Rose Test Garden in Capaha Park and other community garden council projects.

There are eight garden clubs here now with 212 members, and Miss Rieck laughs that her first job with the council was a “wicked one” … ways and means. She has also published the council’s yearbook, changing its format.

That her interest in nature and gardening is sincere is evident to anyone who passes by her home. In the spring, the yard is a profusion of color with red and white dogwood, and during summer months the well-tended grounds are usually dotted with blooms.

She has a rock garden near her back door. Some of the stones are from a Texas ranch where she frequently visited, and others are from nearby rivers and Wisconsin lakes. “If I found a pretty rock, I brought it back,” she says, pointing to a cactus thriving amid the rocks.

The redbud sprouts that pop up in her yard are carefully potted and given to friends to transplant in their yards. One of the most intriguing spots in Miss Rieck’s yard is a small wildflower garden. “I love nature,” she says, recalling many happy days spent on her grandparents’ farm in the Ozarks. Included in the wildflower patch are specimens she has found in nearby woods and also blue bonnets from Texas.

Chairman for last year’s Arbor Day celebration, Miss Rieck’s efforts produced 550 saplings planted by schoolchildren, too, and says that she hopes to better the previous record.

Children, she explains, had their choice of trees so they learned something about each species. “I’ve been teacher all my life, and I guess that’s what I had in mind when we allowed the youngsters to choose the trees,” she smiles.

Her own Arbor Day tree, a ginkgo, is thriving. The skilled gardener says she believes plants and trees do respond if talked to, and adds that much tender, loving care is also an important factor.

Twenty trees of different varieties dot her yard “because I love them. Cape has a lot of pretty trees but we can’t get too many; remember, trees take care of pollution.”

She studied violin in Berlin, Germany, with the late Miss Nora Naeter, a sister of the late Fred and George Naeter, co-publishers of The Missourian, and aunt of the present publisher, Harry A. Naeter. Miss Rieck says one of the most impressive things which has stayed with her through the years is the way Germany protected its trees. “In Germany, a tree does not belong to the property owner. It belongs to the state. When something is wrong with the tree or when it needs trimming, then the state tree department takes care of it.”

Deploring indiscriminate pruning, Miss Rieck continues, “That’s a major difference between American and older civilizations. Older civilizations have always had a great respect for living things…trees and flowers…and I suppose some of that rubbed off on me in Germany.”

Gifted with a way of handling animals, Miss Rieck’s latest teaching experience is a 4-month-ld Irish setter, “Squire Sean Bit o’ Brady.” She has thus far taught the robust pup to retrieve, speak, sit up and, wonder of wonders, housebreaking.

One of her most interesting animal experiences, she thinks, was the time she found a tiny robin in her yard “naked and propped up on his elbows,” she says.

She trained the little bird, feeding it finely ground beef steak on a toothpick. When fully grown, the bird would fly out of the nearby trees and come to roost on her hand when she called. “When the time came to try him on worms, he was scared to death of them,” she grins. “But after the first one, well, he realized he was born to eat worms.”

Acting as substitute mother, Miss Rieck even taught the bird to fly by gently pushing him off a branch. “The first time he fell right on his head,” she recalls.

All of her interests…music, ceramics, flowers…are arts, she says. “All are an expression of one’s feelings. You can learn anything you’re interested in,” she notes when asked how she became so skilled with plants and trees in such a short time. “But you can’t do anything without love.”

Gardening, she believes, must be perpetuated through children, and she finds the junior divisions in the flower show beneficial in helping youngsters discover the joys of gardening. The event, she thinks, is beneficial experience even to non-gardeners.. “You may not learn anything but how to arrange a bowl of flowers, but that’s something,” she adds. “And the arrangements are lovely to see.”

And whether it’s springtime or fall, there’s always something interesting and pretty to see in Miss Rieck’s yard. 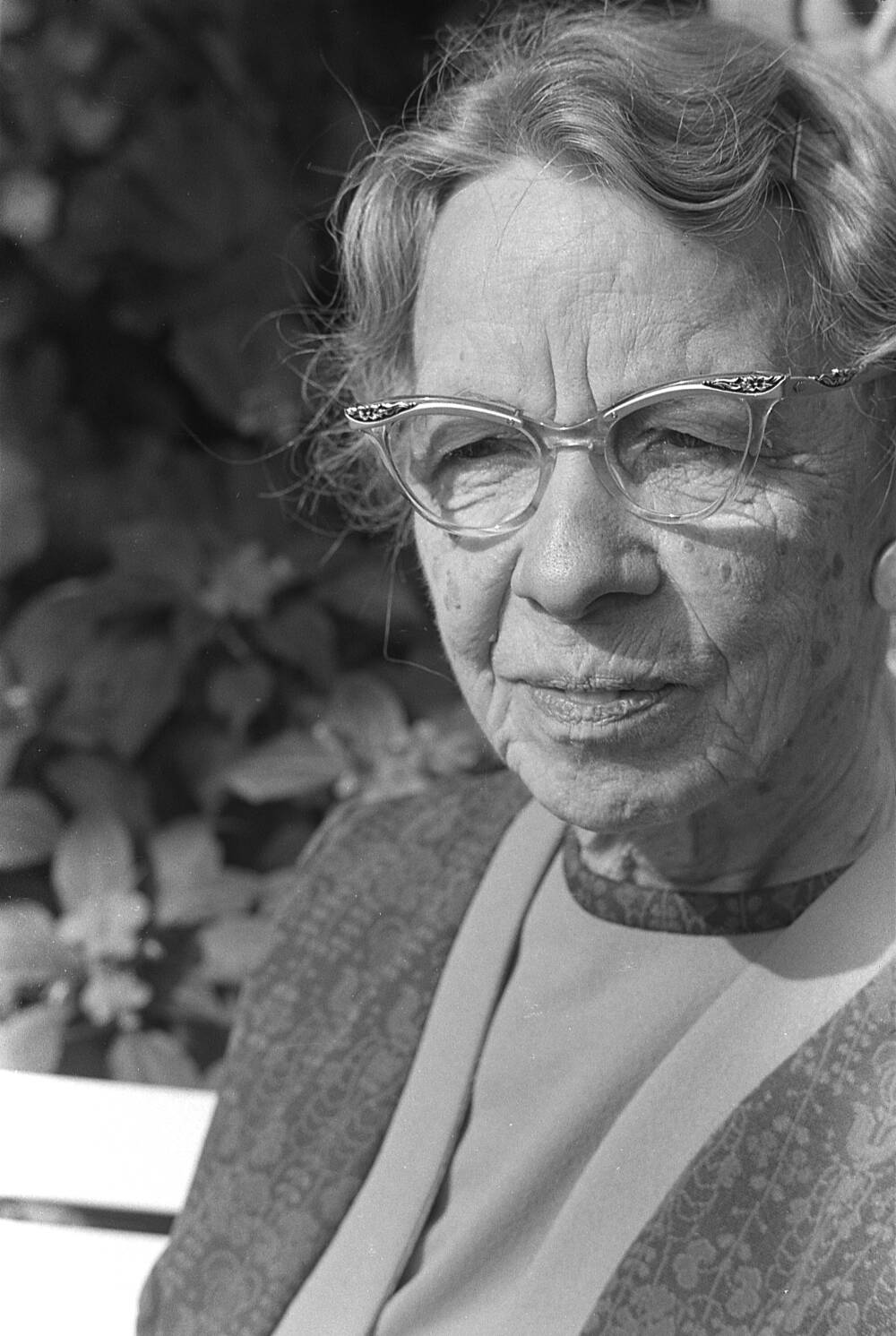 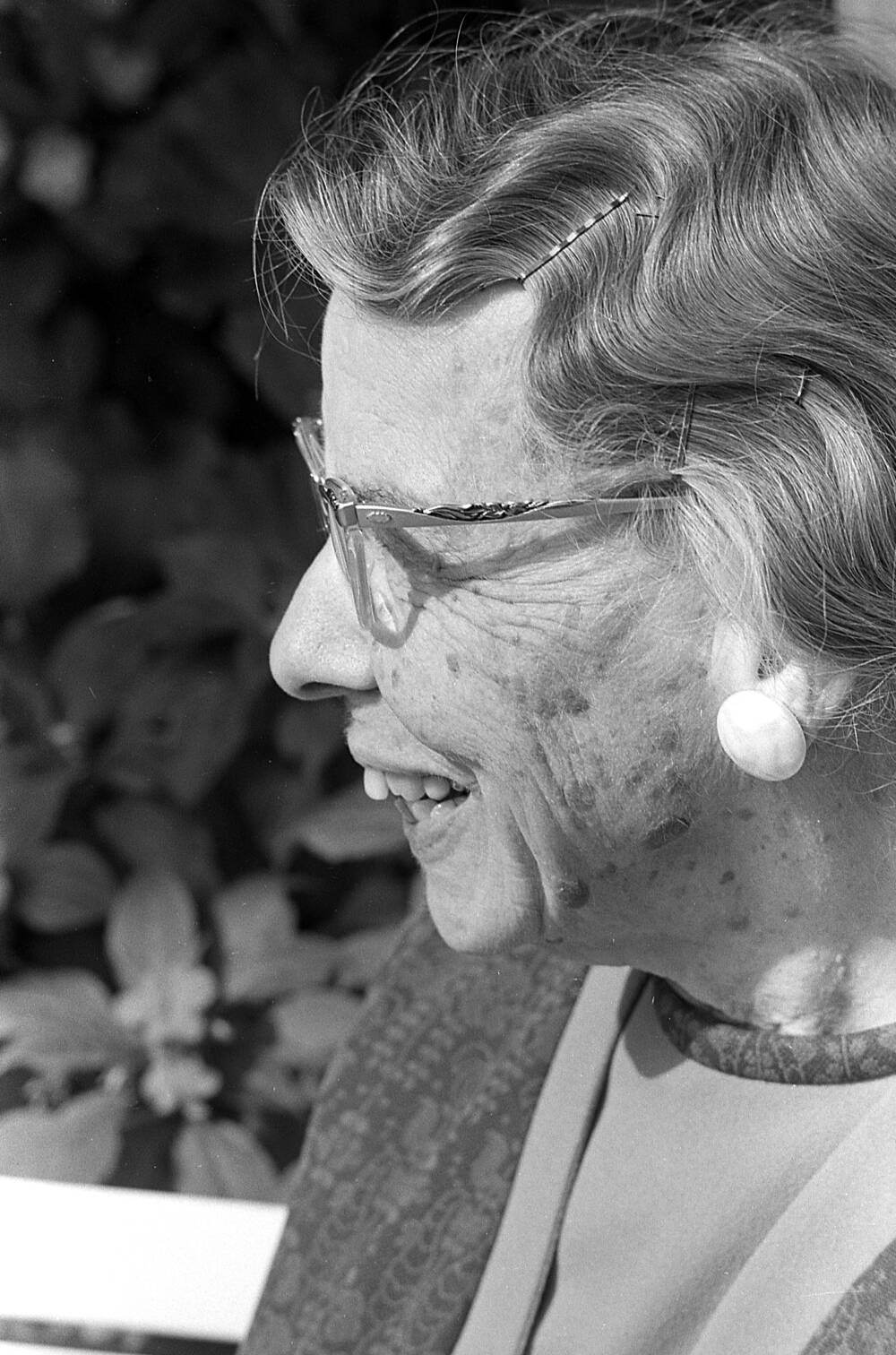 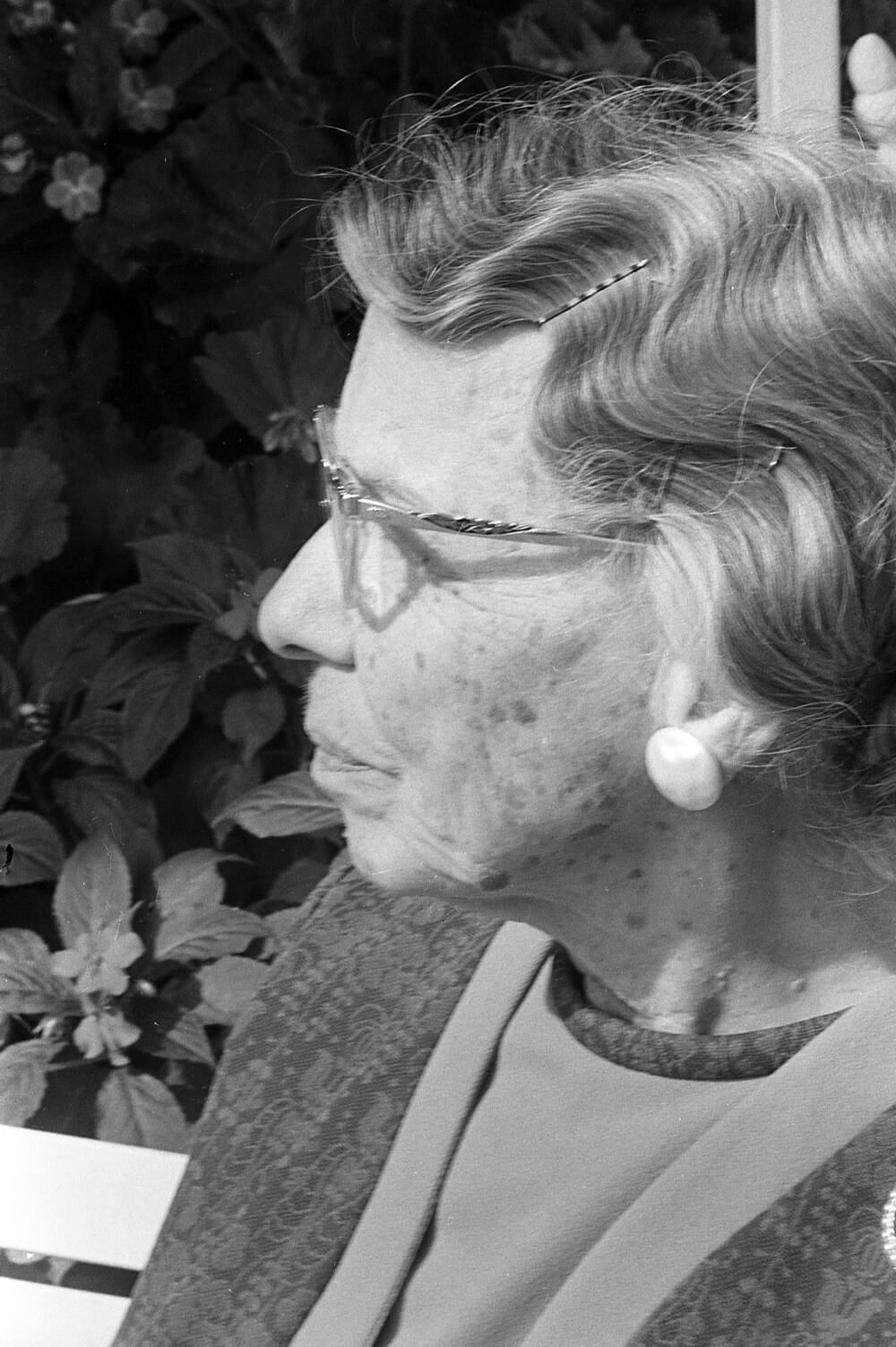 Miss Frieda Rieck, who for nearly 40 years in this area taught children and adults the value of music appreciation, died Saturday at Chateau Girardeau health care facility. Miss Rieck, whose home was at 1647 Ridgeway, was 97 years old.

A noted force in the field of music, Miss Rieck was head of the Music Department at Southeast Missouri State University for 16 years, retiring in 1962. She was known in the community for her contributions to the arts and served as a member of the Community Concert Association and in other community endeavors.

Miss Rieck was born in St. James on March 31, 1882, to the late Mr. and Mrs. Frederick W. Rieck. The family moved to Cape Girardeau about 1907. her father supervised construction of the Frisco Railroad in Southeast Missouri.

She attended the old State Normal School and after receiving a degree in music, taught violin and string ensemble there.

Miss Rieck spent extensive time in Germany and across the United States studying the violin. Her teachers included the late Miss Nora Naeter, sister of the founders of The Southeast Missourian.

She received degrees from Northwestern University, Evanston, Illinois, and held membership in Pi Kappa Lambda, honorary music fraternity, designating scholarships and significant contributions to the field of music education. She also studied at New York University, the University of Chicago and Chautauqua Institute in New York.

Miss Rieck was supervisor of elementary vocal music in the public schools here for 20 years and was also supervisor of string instruments and orchestras in the elementary schools. As teacher of high school vocal and instrumental music, Miss Rieck produced major choral works with them. She directed light opera, oratios and Broadway shows which included complete training of soloists and vocal units, and final conducting of the entire performance.

While at Central High School, Miss Rieck organized the first A Cappella Choir south of St. Louis and directed a school band there. She organized a girl’s drum and bugle corps.

The Cape Girardeau Symphony, composed mostly of her public school pupils, was organized by Miss Rieck. She directed the symphony until 1946 when she began work with the college.

In civic activity Miss Rieck was chairman of the Red Cross Nursing Service in World War I and served as president of the Business and Professional Business Women’s Club during which time a council of women’s club was organized and she became its first chairman.

For a number of years, Miss Rieck reviewed all the community concerts in the capacity of a music critic.

Miss Rieck was co-chairman of the Cape Go task force on community enrichment in 1969.

As head of the Music Department at Southeast, Miss Rieck was instrumental in the completion of the $650,000 music building on campus. It was dedicated in 1961.

Service will be held at 11 a.m. Tuesday at Old St. Vincent’s with the Rev. Bernard Degan, associate pastor of St. Vincent de Paul Catholic Church, officiating. Burial will be in New Lorimier Cemetery.

Friends may call at Walther’s Funeral Home after 2 this afternoon. Parish prayers will be said at 7:30 tonight at the funeral home.

cube with technology
We use cookies on our website to give you the most relevant experience by remembering your preferences and repeat visits. By clicking “Accept All”, you consent to the use of ALL the cookies. However, you may visit "Cookie Settings" to provide a controlled consent.
Cookie SettingsAccept All
Manage consent